Esteban Marín, President
He began to paint graffiti in 2000 and quickly he became part of several organizations from Baix Llobregat, holding different positions in street art associations of Sant Feliu, Cornellà and L’Hospitalet.

Street art awakened his interest in becoming an artist so he decided to study graphic design and illustration in the following years.

In 2009, he made his first large mural (over 150m2) and from that point, he began to work with some architecture studies, willing to integrate mural paintings in the urban city planning. 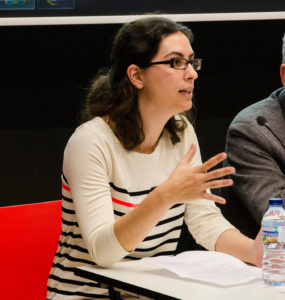 Ninoska Juan Alvarez, Project and planification manager
Graduated in architecture, she has always had interest in art and especially street art. Her main aim is to introduce mural art as a tool for designing public spaces and at the same time, to make art accessible to everybody. As a result, a very harmonious landscape can be achieved when mural art is combined with architecture.

Ninoska has been implementing these ideas since 2009 while participating in projects of public space intervention through mural art and collaborating with local organizations. 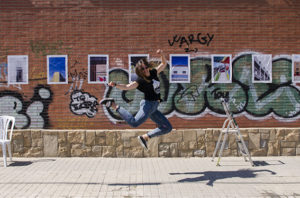 Clara Antón, Photographer
She was 6 years old when she took her first picture and knew then that art would be her passion. Studied Artistic Photography and Make-up.

She is a loving photographer of architecture and street. In 2015 she began to take street art pictures in Contorno Urbano.

Thanks to that, she re-descovered new lines of composition that have brought her settle in a specific style, where architecture, art and surroundings are frozen in a static, balanced and vertical canvas.