CAN SERRA REIVINDICATIU I PLURAL

The project to create a community mural in the Plaza de la Carpa arose in 2017 from an initiative of the Esplai Can Serra, one of the driving forces of the neighborhood. This process was assumed by the municipality as a priority intervention and  established that agents will participate in the process of design and execution of the mural.
The Plaza de la Carpa in L’Hospitalet de Llobregat is located in the Can Serra neighborhood. This space was built like so many other neighborhoods on the periphery of Barcelona between the 70s and 80s and under very precarious conditions for the newcomers to this neighborhood. It was the people who in an organized way struggled to improve their quality of life and that of future generations. It is these people who organized themselves to shape the neighborhood we know today and who made efforts and sacrifices for the present of which we all enjoy today. During the neighborhood struggles, the walls that the construction company erected so that the site could not be used as a plaza and the works were not paralyzed were demolished  by the neighbours.

One of these neighborhood struggles took place in what we know today as Plaza de La Carpa. This space located at the heart of the Can Serra neighborhood was originally intended to be blocks of flats. A prolonged and organized struggle by the neighbors stopped construction. Currently in this space is the plaza, a school and the municipal market.

It is important to remember these neighborhood struggles organized for the common good and not forgetting how a united society can contribute to forming a better present and especially a better future. 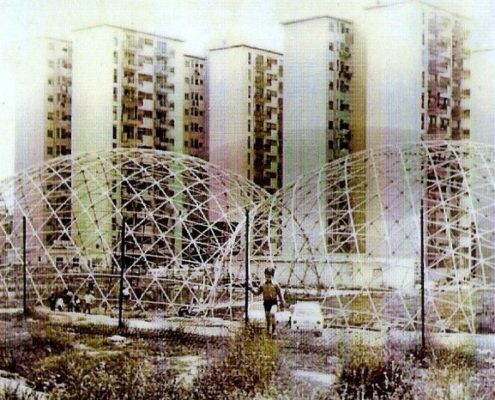 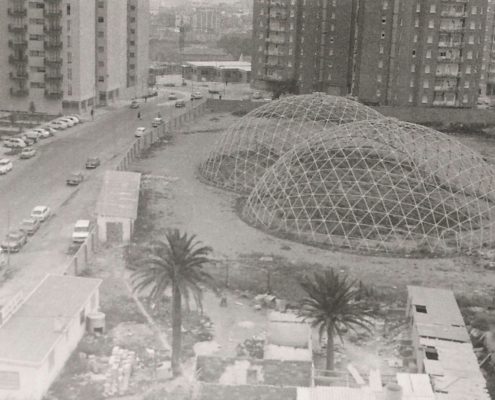 In the images we can see the tents that were installed between the paralysis of the works and the construction of the current square. These tents (Carpas in spanish) give name in the square and were used to make musical and theatrical performances, meetings of neighbors, etc.

The design process was carried out for months with the main agents: Esplai Can Serra and the Neighborhood Association. Added to this process were the schools and institutes of the neighborhood as well as any neighbor or entity that wanted to participate in open days.

Once the mural was designed, an open day was held in the neighborhood for its execution under the supervision of the ONCE and Elisa Capdevila artists, responsible for the final design that represented all the concepts treated during the previous sessions.

In the mural a phrase chosen during the process was represented: Can serra vindicative and plural.

This phrase gives meaning to the identity of the neighborhood and recalls the past evoking a future in which it never ceases to be. On the other hand some scenes emerged from the process such as the tents, Paco el Tabaler (important historical character of the neighborhood) or the neighbors pulling down the walls.
The participating agents were: Esplai Can Serra, AVV Can Serra, Festival Commission Can Serra, School La Carpa, IES Torras and Bages, IES Rubió and Ors and the municipality of Hospitalet.